Five Things I Learned While Travelling Solo For The First Time

First, let’s get it out there: when I was young, I hated travelling. Shocking, I know, but it was true. Like most Malaysians, I enjoyed the odd trip to Genting, but I used to think travel was a social inconvenience. The planning, the packing, they were all such a hassle.

What made it worse was that most of the time, my family would join a tour group when travelling. That meant having to spend time and interact with near complete strangers for an extended amount of time. For someone who’d rather prefer staying at home with his Playstation 2 (90s kid ftw!), it was an unnecessary chore. 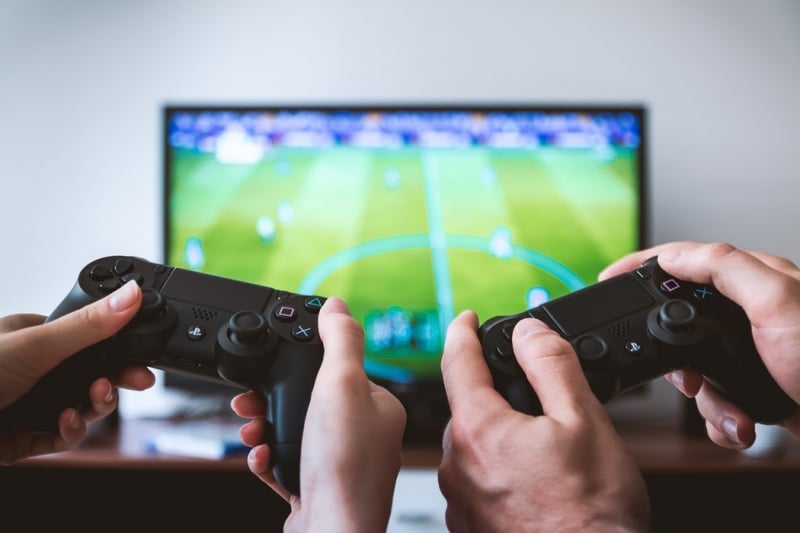 That all changed 6 years ago when I was on a year-long student exchange programme in the U.K. It was mid-March and I had just gotten out of a slightly messy relationship. My flatmates were all in the midst of their exams. On the other hand, I’d just submitted the last of my coursework to be graded. So I had plenty of free time and they had virtually none.

And then one day, I got bored of staring at my laptop all day and something clicked in me. I went online, booked a one-way train ticket to Edinburgh and left. Of course, I posted a note on my door saying I’d be back…eventually. Didn’t want any of my flat mates to freak out after all.

I arrive in Edinburgh 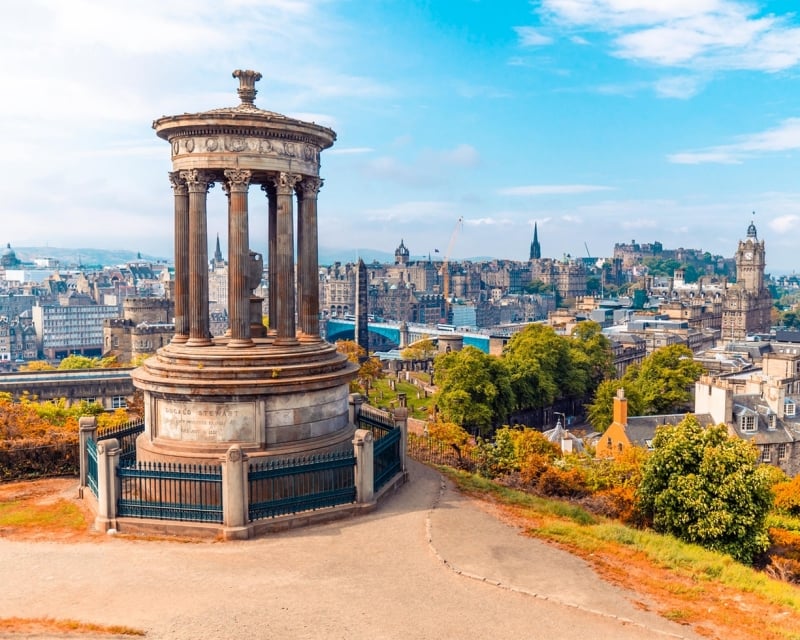 Until this day, I can’t forget the liberating feeling I felt as I exited the train station and walked onto the cobbled streets of Edinburgh. Firstly because, after a 7-hour ride from Nottingham to Edinburgh, I was just happy to be moving my legs again! Secondly because in that moment, I realised that I was all by myself in a land where literally no one knew me, and for that reason, my spirits lifted.

I was excited by my new surroundings. The many new places to explore at my own leisure, the new people I may or may not meet. Even the new food I would be able to experience (I found haggis – Scotland’s infamous national dish – to be oddly delicious) all excited me beyond reason.

I stayed at a rather modest B&B. My room was nothing more than a re-purposed attic! And yet,it was cosy enough to resemble a homey ambiance. Edinburgh, as beautiful as it is, was also a truly friendly city. I met plenty of great people, albeit fleetingly, and generally had a really good time exploring every corner of this ambient city.

It was there and then, whilst treading on the cobblestone paths of the Royal Mile in Edinburgh, a few yards away from Edinburgh Castle, that I felt at peace. And it was in Edinburgh where I fell in love with travelling. 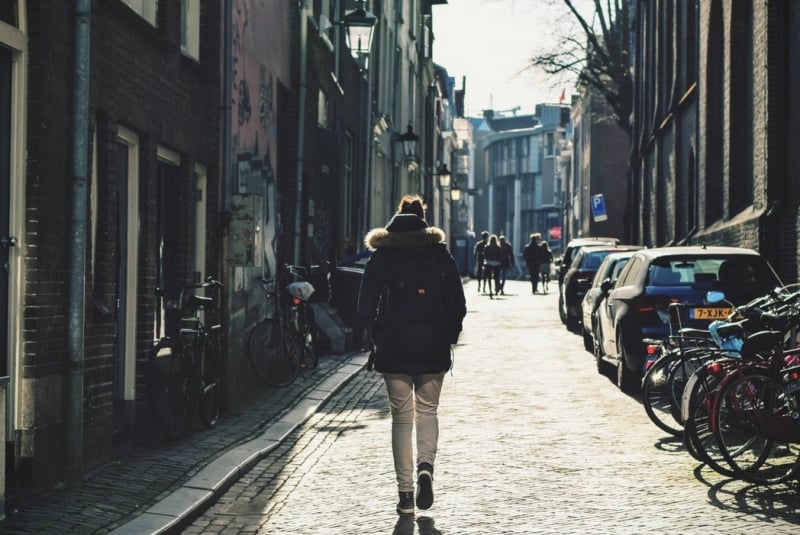 A week later, while on the excruciating 7-hour train ride back (seriously, I can’t quite remember how I survived), I reflected on my first-ever solo adventure and realised that I learned a lot during this time.

For one, I learned that the world isn’t all doom and gloom 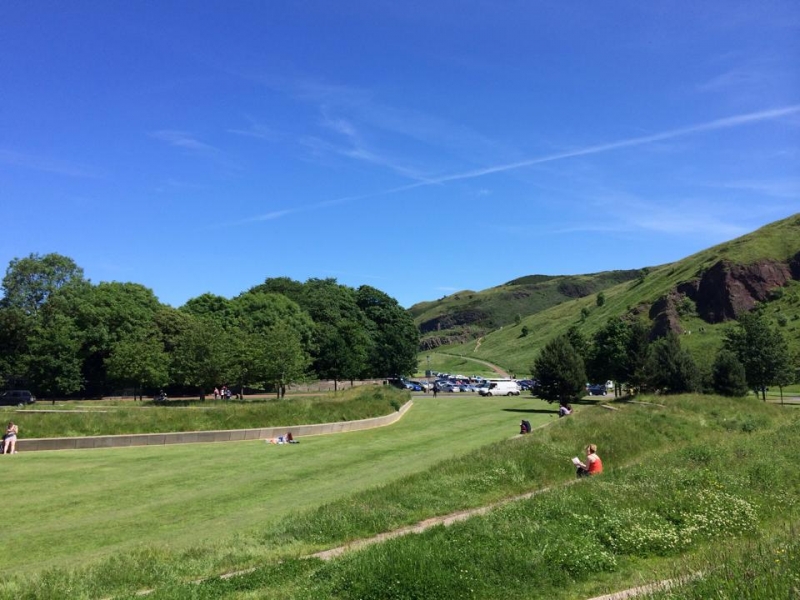 To be honest, when I was planning my trip to Edinburgh, I wasn’t in my best mental or emotional state. Some stressful events in my personal and social life had clearly taken its toll on me. I wasn’t depressed but at that time, my life was an uninspiring repetition of patterns and mundane activities.

It was only after leaving behind my emotional baggage (albeit only for a week) did I remember that there was a world happening outside my little bubble. Despite the chilly spring weather, people were still going out for hikes in Edinburgh (Arthur’s Seat, must visit!), having picnics in the park, and going about their daily business. 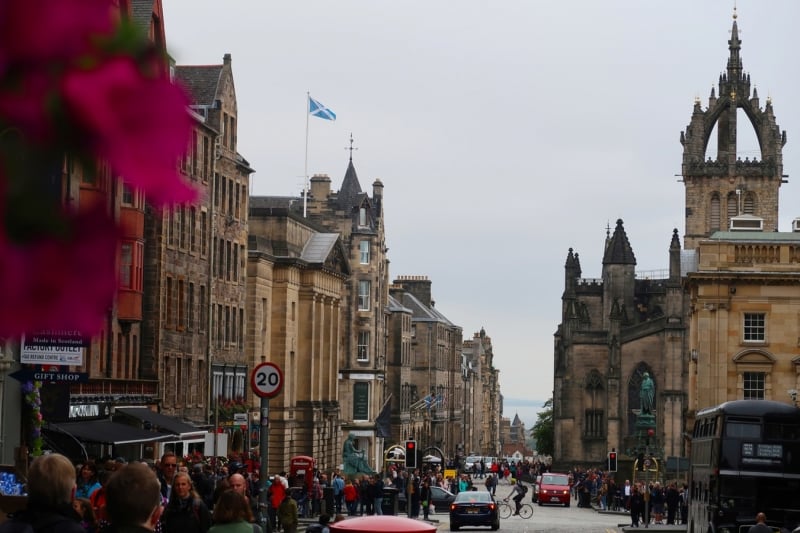 Travelling solo, I learned that even though the world around you might seem dark and gloomy (literally, because the weather in the U.K. is almost always gloomy!), there are always plenty of wonderful things to look forward to. Life finds a way to go on, and travelling alone in Edinburgh helped me find the avenue to focus on the good things and recharge.

I also learned that the world is full of good people 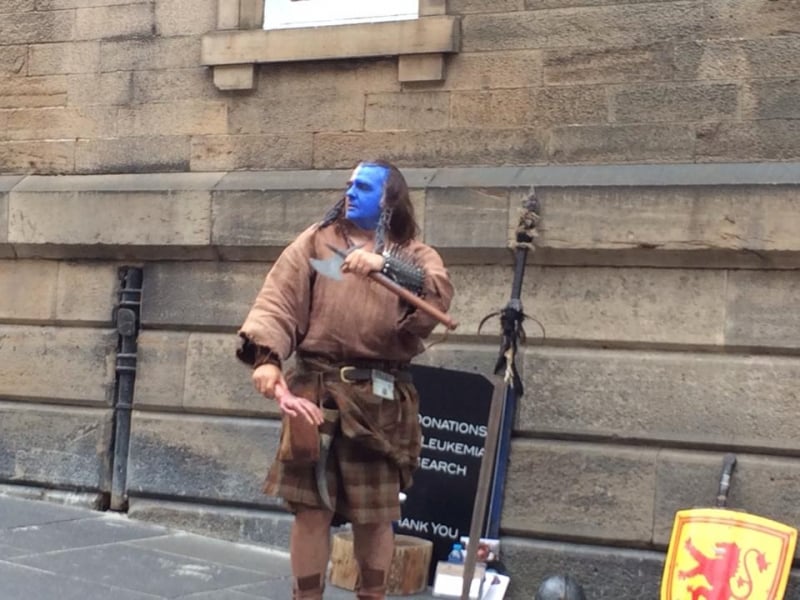 When I was in Edinburgh, Brexit didn’t exist yet. Although, Edinburgh did vote overwhelmingly to stay in the EU, which already tells you a lot about the people there. As you travel Edinburgh, you’ll also realise that it’s a backpacker-friendly city. There are many students and solo travellers like myself out and about.

Outside Edinburgh Castle, I met a man, Drew, who was cosplaying as William Wallace from the movie Braveheart to raise donations for leukemia research in Scotland. I’m a huge fan of the movie so of course I went forward to speak to him. We had a little chat and I even took a selfie with him! And no, he didn’t coerce me for money afterwards though I did donate a little bit afterwards.

Apart from Drew, I also managed to strike up some light conversation with many of the locals. Most of them were more than happy to have a chat. The more I mingled with the locals, the more I realised that there were plenty of genuinely good people in the world. Friendly folks who make the world a better place with their kindness and friendly gestures.

Had I been travelling with my friends and not alone, I doubt I would have had the opportunity to break out of my shell and meet these wonderful people. I would have stuck to my own social circle and experienced Edinburgh without actually experiencing “Edinburgh” (if that makes sense).

Travelling solo empowered me to embrace my true self One stark difference between travelling solo and travelling in a group is how much freedom you have. I could do whatever I wanted, whenever I wanted without taking other people’s likes and dislikes into consideration. Being alone meant that I was free to be myself and do the things that I wanted to do.

No longer did I have to put up with common protests like “it’s boring”, “it’s embarrassing”, “it’s too much work”, “the line is too long”, “it’s lame”, “it’s too expensive” and all the other annoying excuses. If I wanted to go to a cosy cafe and spend the afternoon doing nothing except sipping a cup of peppermint tea with a good book, I could. 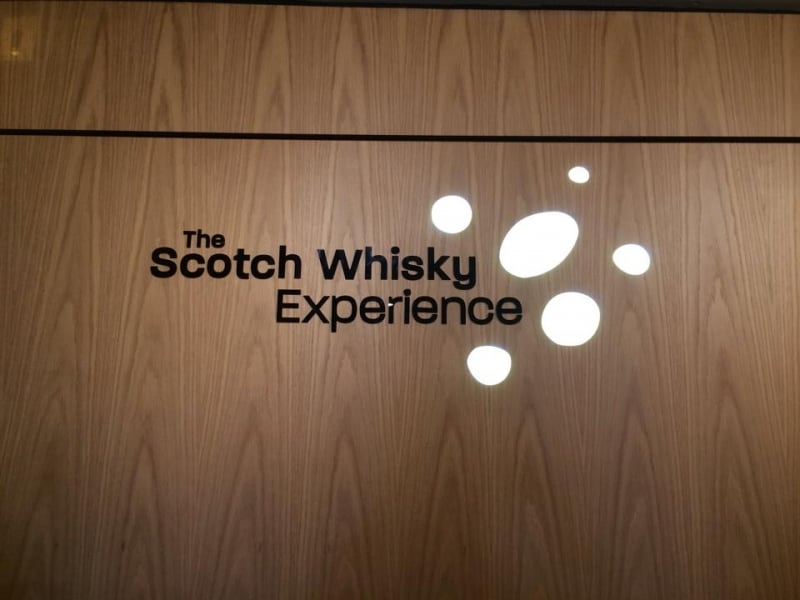 Hiking Arthur’s Seat at 7 a.m. in the morning? No problem! Start a conversation with the cute girl manning the reception desk at the Scotch Whiskey Experience (if you’re reading this, Ella, I hope you’re well!)? Of course…just let me calm my nerves a bit first! In fact, I spent half a day at Camera Obscura, a trick eye museum outside Edinburgh castle just because I wanted to and attained ultimate power! 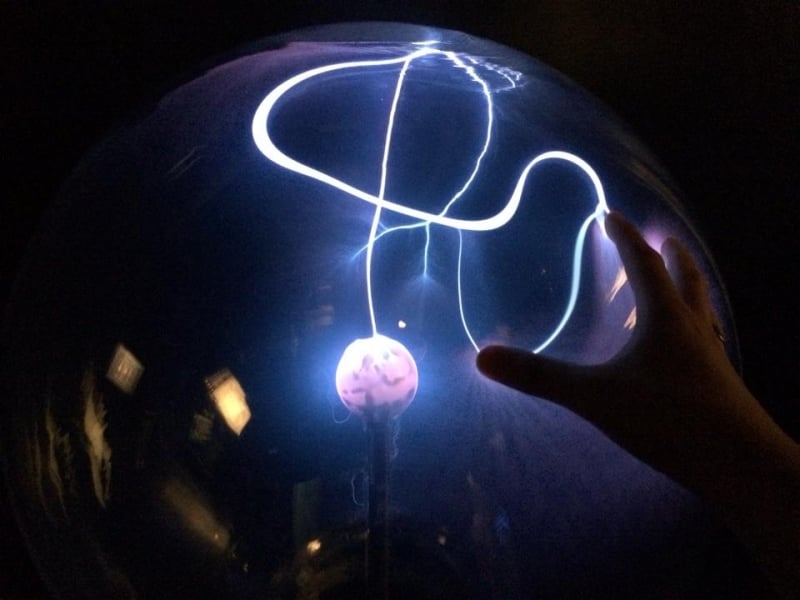 Okay, not really but you get the idea. Travelling alone, there was no need for me to put on a mask or to please anyone but myself. I could do the things I loved without being judged by my peers and that, frankly, was exhilarating.

Essentially, time alone is just as important as time with your loved ones 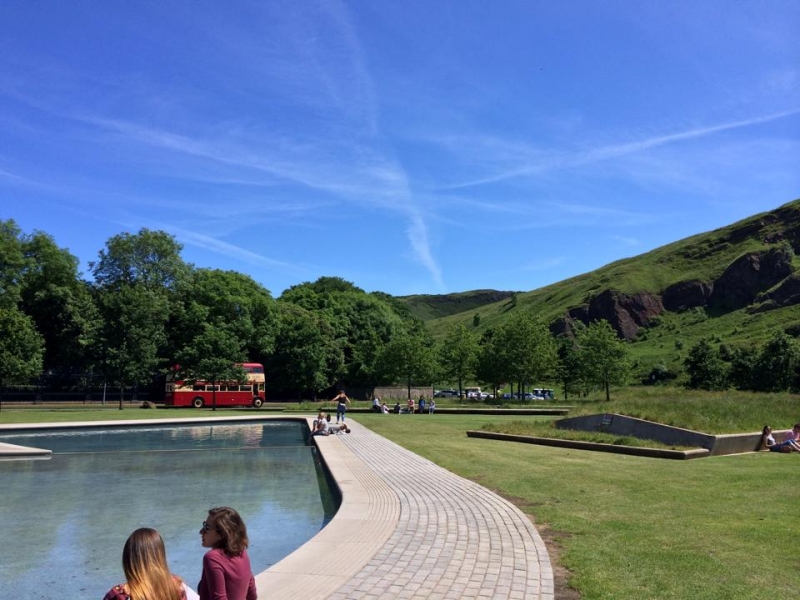 In today’s social media world, it can be said that we are never truly alone. I’m sure most of us are part of at least one family Whatsapp group with daily “good morning” messages. But as much as spending time with friends and family is a privilege to treasure (more so as you grow older), you shouldn’t neglect spending time with one’s self either.

Travelling alone, I learned to love and enjoy my own company and to dwell in my own thoughts. I was able to embrace the silence and revel in it. In many ways, it’s a healthy way to get comfortable with one’s own self and I definitely recommend trying it! Again, this was when I was travelling solo for the very first time. It’s safe to say that leading up to it, I felt nervous and, to a certain extent, a little scared. I wasn’t sure what to expect or what to do if things were to go wrong. I’d never made any travel plans before so I was worried that I would be selling myself short and miss some important attractions.

All that proved to be needless worries in the end. As soon as I started exploring the city on my own, I started growing more comfortable and more confident. I realised that if things were to go wrong, they would. All I had to do was go with the flow and adapt to it. That’s not saying that you should leave your valuables in a crowded public space and hope nothing happens to it! 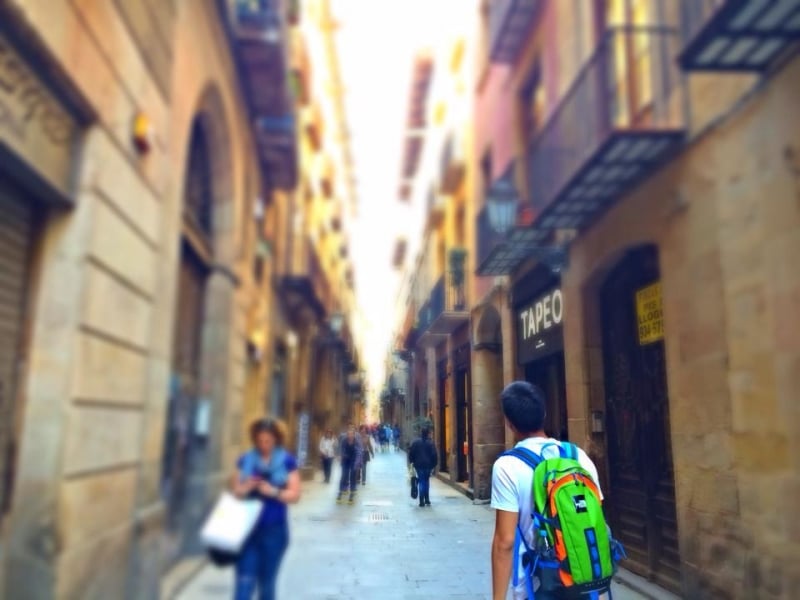 Since returning from Edinburgh, I felt more self-assured in my decisions. I’ve also backpacked solo to plenty of other destinations like Taiwan, Hong Kong, Singapore, and even spent a couple of days in Barcelona alone after my friend ditched me in Madrid. I’ve also fallen madly in love with life on the road and, looking back, I wouldn’t have it any other way.

If you’re thinking of travelling solo yourself, I’m all for it! Of course, take as many precautions as you need to stay safe, but ultimately, I think it’s an experience everyone, for better or worse, should try at least once in their lifetime.

For me, it’s led to a lifetime of memories and a lifelong passion.

Also read: What To Expect When Hiking Hallasan: A Malaysian’s Personal Account