Forget Universal Studios Hollywood. For hardcore TV and movie fans, Warner Bros. Studio Hollywood is the place to be when you visit La-La Land. That was exactly what I did in 2016 and I’m here to give you the gist of the tour.

During the three-hour tour, you can expect to experience these 10 amazing things you should totally do and see for a memorable experience:

1. Check out the Batmobile collection

From Batman (1989) to  Batman v Superman: Dawn of Justice (2016), the batmobile has always been the caped crusader’s ride of choice when getting around Gotham. Warner Bros. Studio houses all the bad-ass Batmobiles that were featured and driven by the legendary Batman in all his live-action films.

Apart from admiring these smoking hot rides, you can also take a stroll in the real Batcave! Just imagine suiting up and revving those engines to chase down the Joker and kick ass along the way!

There are many more unique Batmobiles in the collection with which  you can let your imagination run wild. Unfortunately, no, you cannot take any of them out for a spin, if that is what you are wondering. Why? Because you’re NOT Batman! 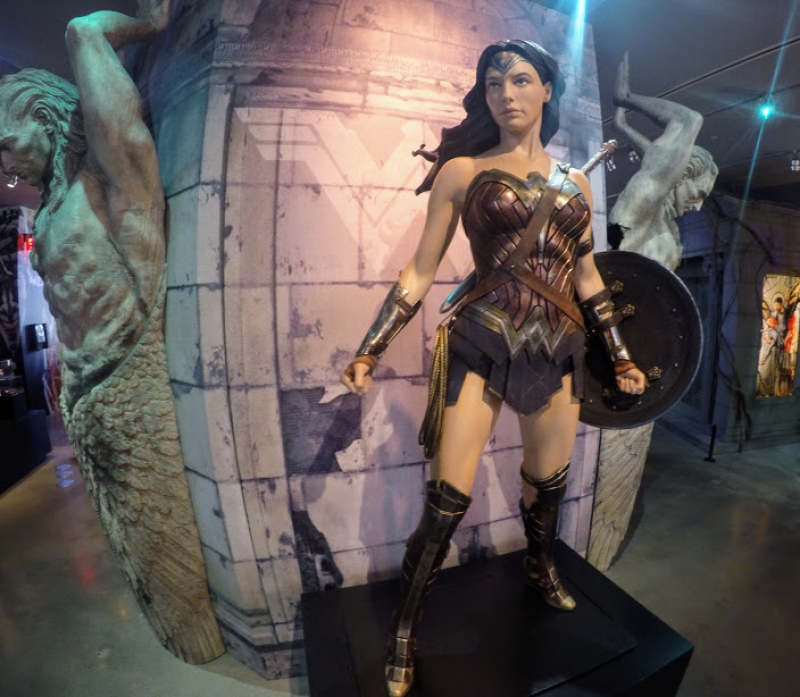 Leave the DC vs. Marvel debate behind and treat yourself to a tour through the DC Universe. Lose yourself in the wardrobe, set design, and authentic props from Wonder Woman like the proud fan you are.

Or, like what I did, gawk at the exquisite life-sized Wonder Woman statue and take an unhealthily obsessive number of selfies with her. Gorgeous goddesses aside, you can also find the handsome looking Steve Trevor and other beloved characters from the movie. The exhibit also features classic characters such as The Joker and Harley Quinn from Suicide Squad, Batman, and of course, Superman.

Last I heard, Aquaman (2018) is the newest addition to the DC Universe exhibit at Warner Bros Studio. The macho superhero with his armored suit and the magnificent underwater world come to life vividly in the exhibit. Just don’t expect Jason Mamoa to turn up. Or maybe he will? Find out for yourself when you visit!

3. Be awed by the wizarding world of Harry Potter and Fantastic Beasts 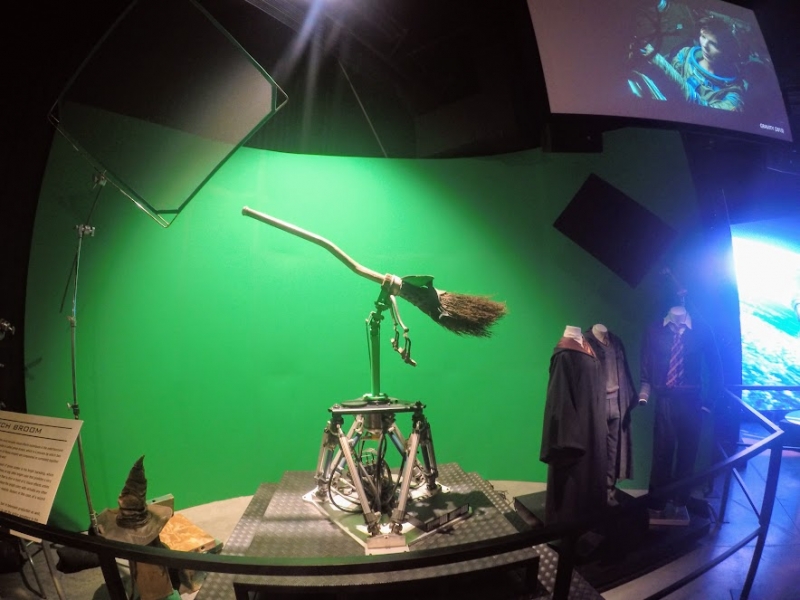 Though the wizarding world at Warners Bros. Studio Hollywood is not as comprehensive and grand as its London counterpart, it does boast authentic props such as the Sorting Hat and various broomsticks and robes .

In case you’re wondering, yes, you are allowed to have photos taken with the broomstick with a greenscreen backdrop for special effects. It is Hollywood afterall! If you’re itching to know how the movies were brought to life, you can also geek over some of the original storyboards too!

In addition to Harry Potter, you can also visit the exhibit of the Fantastic Beasts franchise and admire the movie props and costumes. I mean, look at the intricate details of the costumes worn by Eddie Redmayne in the movies! Now that’s dedication to detail!

4. Hang out at  the iconic Central Perk Cafe set from Friends! 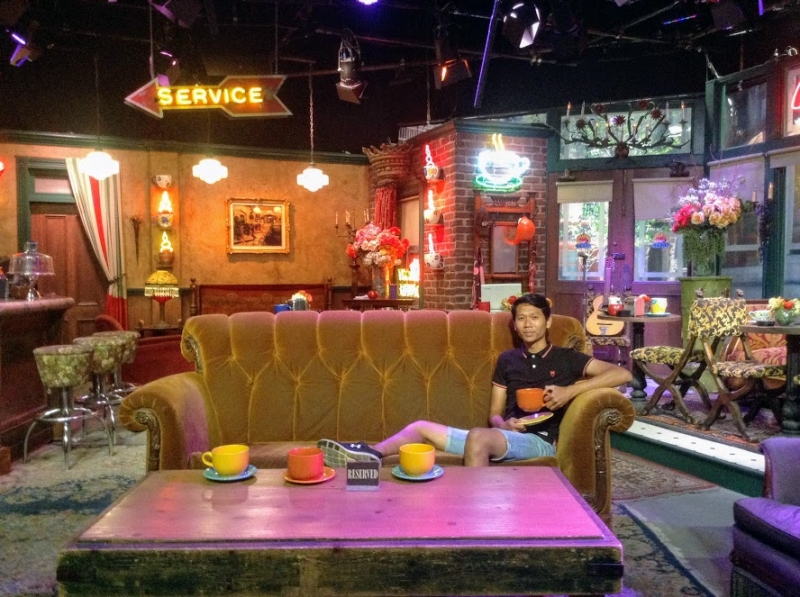 Some of you might not know this, but Warner Bros. Studio is home to Friends (1994 – 2004), one of the greatest American sitcoms and a global cultural phenomenon. Think of the series and the iconic pick up line ‘How you doin’?’ probably comes to mind. Or, if you’re a diehard fan like me, you might even catch yourself humming the tune of the addictive opening song right now!

Oops, I got a little carried away. My point is, although the sets of Friends were disassembled after the show ended in 2004, one of its main settings—Central Perk Cafe—was rebuilt with its original furniture in  the studio. So, as fans of the hit comedy, you can and totally should visit the cafe set up close and hang out on the iconic couch where the OG gang once sat!

5. Visit awesome sound stages where some of the hottest TV shows are filmed 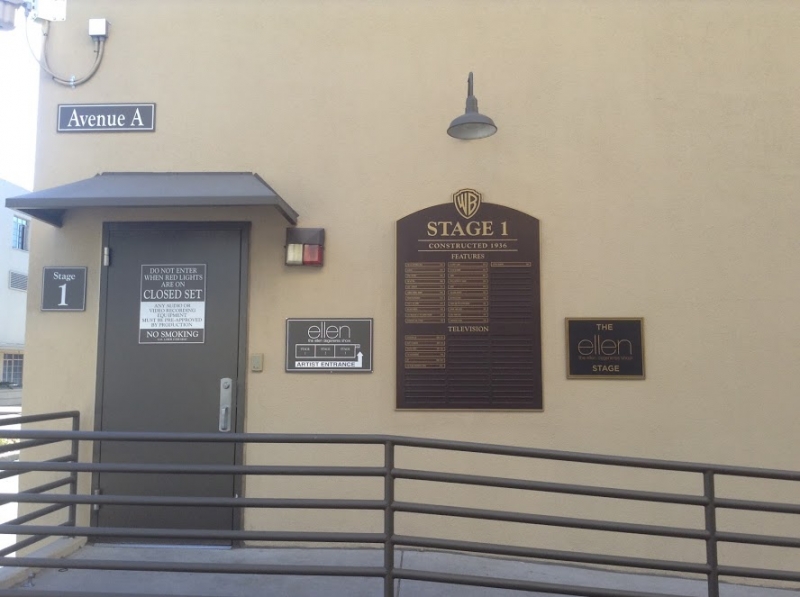 Like it or not, you are not going to have much say in which sound stage to pop into while you’re on the tour. This is because you might be on the studio tour at a time when the taping of some shows are taking place. So, your tour guide will only bring the tour group  to sound stages that have no tapings going on. For instance, during my tour, we got to enter The Ellen DeGeneres Show and The Big Bang Theory sound stages, both of which I am a huge fan of.

For obvious reasons, visitors are not allowed to take any photos in any of the sound stages and the visits are pretty short. But you get to take a closer look at the real sets and inner workings of some of your favorite TV shows. How cool is that! Apart from Ellen and the Big Bang Theory, some other sound stages include: Shameless, Lethal Weapon, The Real, Young Sheldon, AJ and the Queen, Mom, and Fuller House.

6. Learn a thing or two about the process from script to screen in Hollywood 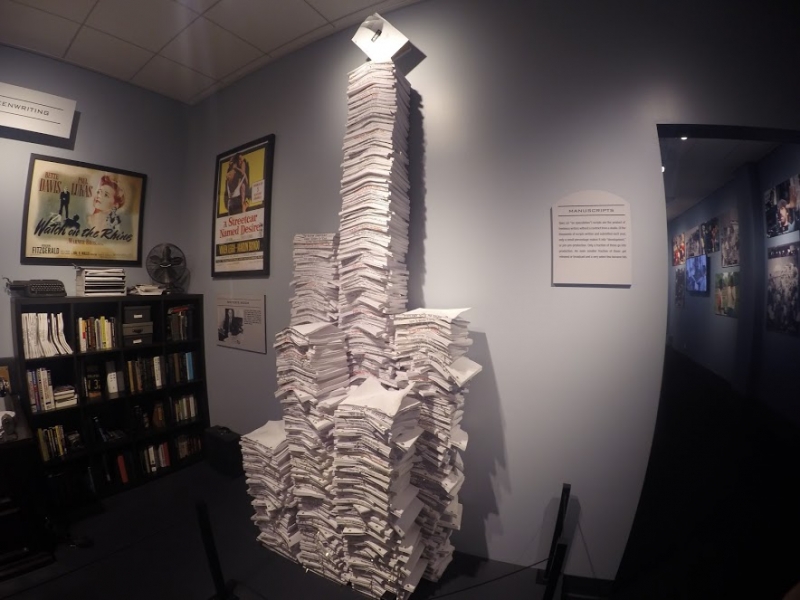 It is okay if you do not get to thoroughly explore sound stages that house some of the hottest shows on TV now. You get to do that in Stage 48! Stage 48: Script to Screen is where you can  roam about freely and to explore the entire TV and movie making processes, from pre-production to post-production.

You get access to the art of script writing, story boarding, role casting, costume design, art design and even the intricacies of sound editing. Pro tip: check out the short film playing in the luxurious auditorium, explaining how stunning sound and visual effects are created, layered, and added during the post-production process of the blockbuster Gravity (2013).

7. Take a stroll in the props department 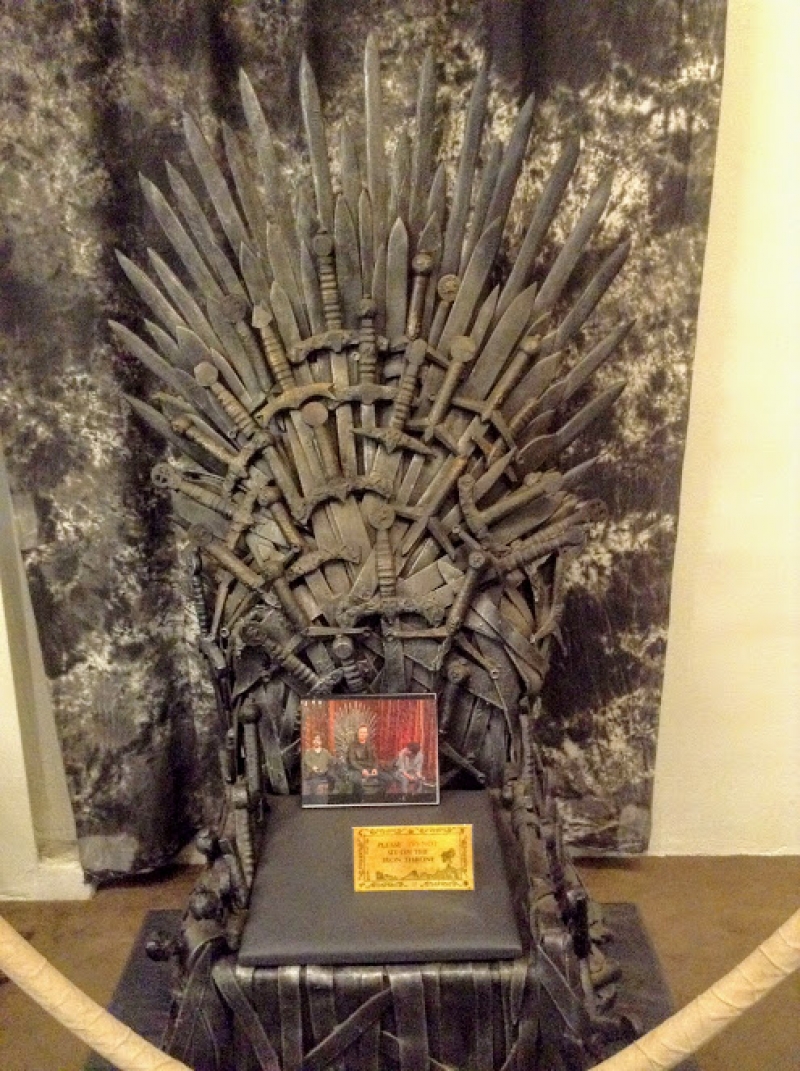 The name may sound dull, but the props department is anything but! Here, in the props warehouse, you get to marvel at a ton of movie and TV props collected throughout different eras. . For instance, there is an entire  shelf of landline phones, ranging from models  in the 1920s to more modern ones.

Any production team at Warner Bros. Studio can simply walk in, choose the right landline phone that matches its show’s timeline, and book it. Phones aside, there are also famous, authentic props you can check out in the warehouse. These range from  the iconic chandelier in Casablanca (1942) to the awe-inspiring Iron Throne from Games of Thrones (see the photo above).

8. Get goosebumps from looking at the Annabelle doll and other props 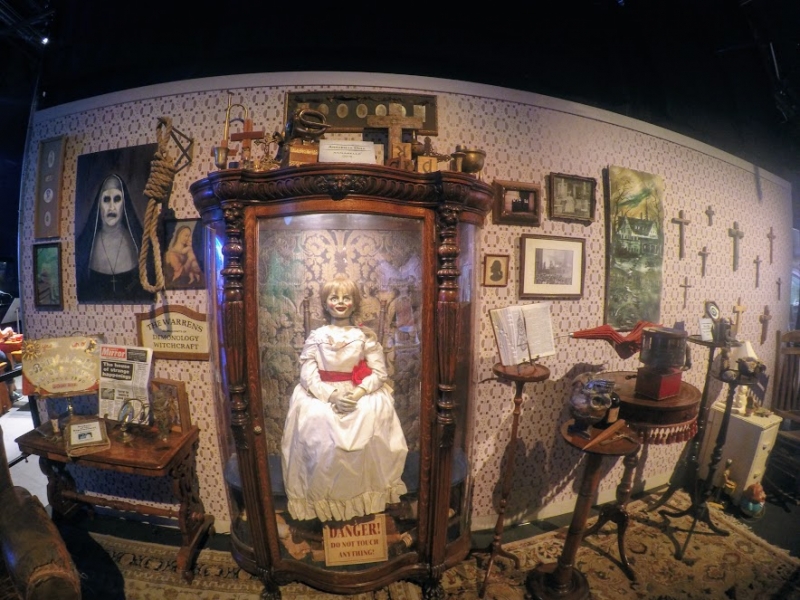 Do not scream when you are somewhere on the tour and turn around to find the Annabelle doll staring straight at you (just for the record, it totally did not happen to me). Instead, enjoy studying the interesting yet scary doll and props used in the Annabelle movie franchise.

Be amazed by the amount of intricate details there are in the photos on the wall, the hangman’s knot, the crosses, the doll, and so on. Again, do not freak out when the chair starts rocking. You have been forewarned. 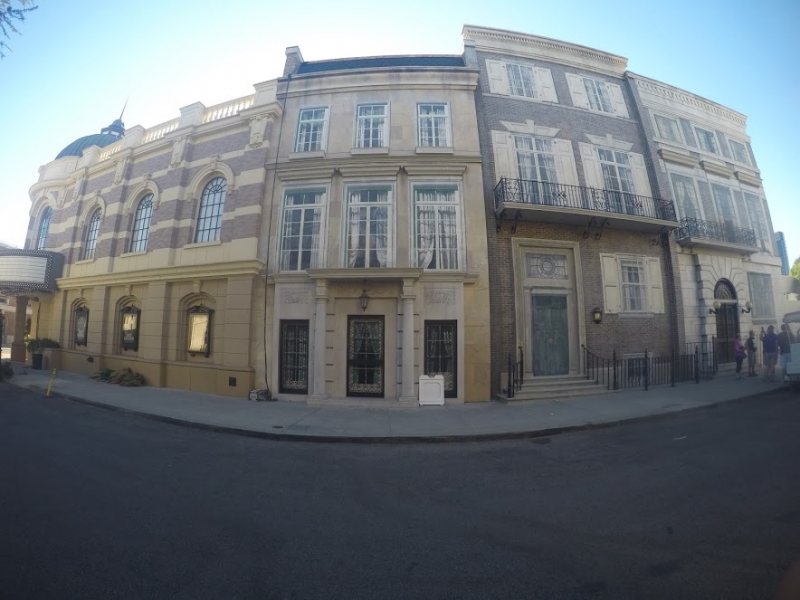 All the things you should totally do and see that are mentioned above are indoor attractions. You might have been led to assume that there is nothing interesting outside.  However, it’s time to get rid of the assumption (if any). In fact, the backlots are where the outdoor action scenes take place!

Many TV shows and movies that are now filming in sound stages at Warner Bros. Studio shoot their exterior scenes on the backlots. There are ten backlots at the studio and they all represent different towns and streets So, while you are on the tour cart or walking around the backlots, check out the New York backlot, the Any-American-Town backlot, the Chicago backlot, and more. You may even recognize some of the backlots and go, “Hey, I saw that somewhere on TV!”

10. Get a cup of coffee at Central Perk Cafe and shop for souvenirs before you go Feeling hungry and thirsty after so much walking? Fortunately, at the last stop of the tour, there is Central Perk Cafe where you can enjoy a cup of coffee and even some sandwiches. After that, next to the cafe is the studio store where you can check out some pretty dope merchandise and souvenirs that you can buy for your family and friends back home. It has a wide selection of authentic merchandise and gifts from TV shows such as The Big Bang Theory and movies such as Harry Potter. Are you thrilled about visiting Warner Bros. Studio Hollywood already? Start planning your trip now! Your inner cinephile will thank you later!

OD is a freelance writer who aspires to be a full time globetrotter. He is always up for a trip to the US, UK, Europe, or the moon.